The Zero-Day Upgrade Cycle (Or Why Everyone Needs Great Tools) 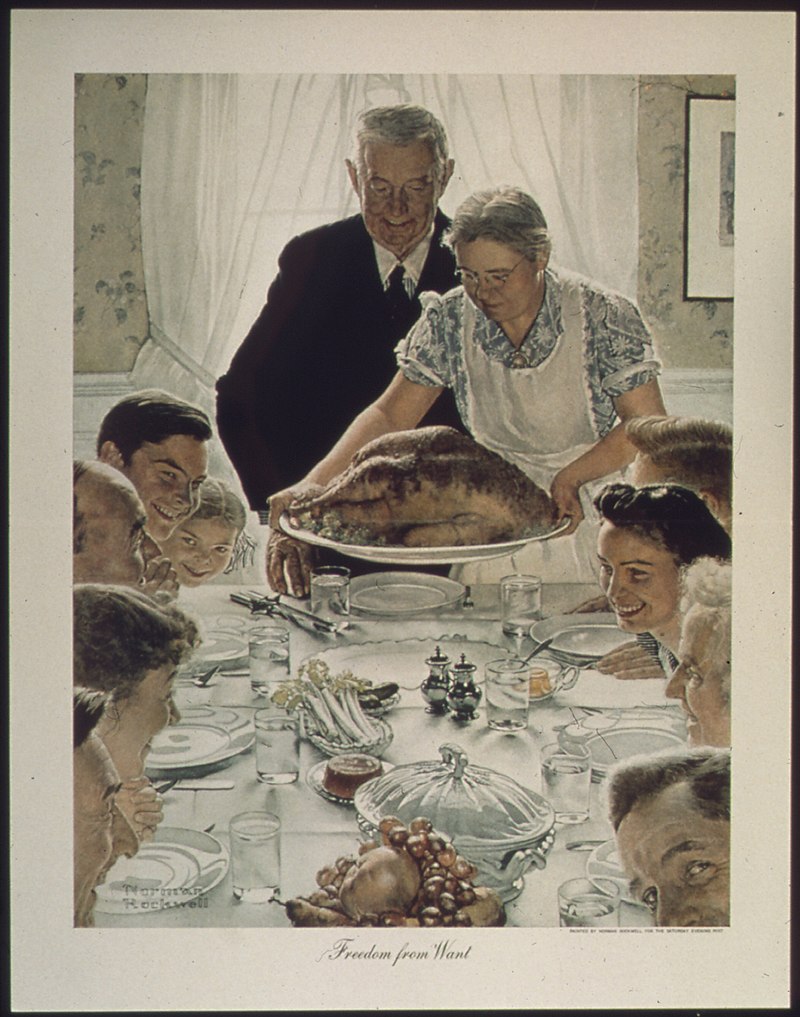 Freedom from Want, painted in 1942 by Norman Rockwell, is an American icon and reflective of Maslow’s hierarchy of needs. We achieve more and contribute more when our needs our met.

Note: While preparing our new Nebula tool for release, I came across this unpublished post about tooling that I’d written two years ago when we started the company in November, 2018. Sprint, mentioned here, has since become a nothing-burger sub-brand of T-Mobile. Their tooling is one of the reasons they failed.

Thanksgiving is almost as famous for the dinner conversations as for the dinner itself. This year, while discussing geeky stuff with my cousin, he asked me about the latest Intel Core i9 processors and how they fit into our hardware plan. I told him that I like to buy the fastest processor I can get at the time because it lasts longer. In my experience, the very best equipment costs about half again as much as the next tier down but performs well far longer. I said, “Most people are on a three year upgrade cycle but with this approach you can get to a…”

“Five year cycle,” he said, as we finished the sentence together. Xavier was a VP of Operations for a major worldwide airline. He knows a lot about procurement cycles and getting the most out of expensive hardware. And PC hardware is expensive, there’s no doubt, which is why many companies avoid spending what they should on IT.

When I was a mainframe programmer at IBM’s Santa Teresa Laboratory, we had a zero-day upgrade cycle. You could get anything you needed immediately. IBM operated a PC Store on campus just for employees. With nothing more than a manager’s signature on a tiny scrap of paper, you could stroll into the PC Store and get whatever you wanted. There was no drawn-out requisition process. I didn’t even have to specify a model or a price. Your ticket would say something like “PC Desktop” and a signature and you’d just pick out what you need. Needless to say, this was a geek’s dream come true. No having to explain your equipment requirements to people in suits. No arguments about how much it cost to have good tools.

Now you may say, “Well, IBM has a lot of money and they make computers and they could afford to do that.” Of course, those things are true. But there’s another reason for IBM’s generosity when it came to computer hardware and software. It’s because the company figured out that such an approach would actually save them a huge amount of money.

In the 1990’s, every IBM employee worldwide had access to a 3270 terminal like this one. IBM used these in a study to measure the responsiveness of the mainframe and its effect on programmer productivity.

You see, IBM is very studious. They don’t do anything without having a PhD chart it out first. Years ago, they asked some smart guys to see if the computers and software tools available to programmers made a difference in their productivity. They used a simple metric: the responsiveness of the computer vs. the number of lines of code minus the lines of errors that the developer produced. Using their own worldwide network that predated the internet, it was easy to measure the computer’s responsiveness — down to the millisecond. Likewise, it was easy to correlate every programmer’s output with how many lines of ‘good’ code and how many lines of errors he or she wrote.

If you’ve ever written code, their findings won’t surprise you. Every millisecond of delay in the developer’s computer was costing the company money in reduced output and increased errors. With what IBM was paying programmers then (and what they cost now), it was simply cheaper to make the computers as fast as humanly possible in order to allow the developers to be as productive as possible. When programmers leave the flow state, as Mihaly Csikszentmihalyi calls it, there is a time penalty to recover. Any delay in the hardware or software could result in losing the programmer’s attention and taking him or her out of flow. Hence their willingness to let us have any tech tools that we needed for our jobs.

Amazon, which started as a bookstore, is now a cargo airline and a robotics company because it’s cheaper to invest in the tools you need to run your own business than to waste time with outdated equipment and systems that aren’t optimized for your needs.

Taken from a 30,000 ft. view, this concept applies to everyone in your organization — not just programmers. In an earlier post, I alluded to a brief stint I did at the Sprint store. Let me tell you, Sprint has shockingly bad IT. Shockingly. Bad. It’s clear that no one at Sprint has studied how much time their employees spend fighting with the company’s outdated hardware and software. It’s time they’re not spending on getting new customers — or making the current ones happy, which is even more important. Anyone who watches Undercover Boss can tell you the same thing. Old, slow computers and outdated software waste your employees’ time but, worst of all, they hurt your product and your customer service quality.

Ask any developer… loving your hardware is a big part of getting stuff done. My MSI laptop is responsive and doesn’t hold me back. It’s also just fun.

In addition to making the programmers more productive, having better computers made working there a lot more fun! I’ve always thought that one of the best perks of being in the computer business is that you get to have kick-ass hardware. It’s quite possible that the enjoyment of having performant hardware and software contributes just as much to programmer productivity as response time. People should have the tools they need and the tools they want in order to do a great job. At IBM, this required a $40 million mainframe which they also let me access from home. How many nights I spent volunteering to learn about work hardware and software because it was simply awesome — versus being frustrated all the time with crappy tools and trying to avoid them. Today, I use a $2,000 laptop for the same reason.

IBM had another brilliant way to spread tools around to those who needed them: an early internal version of eBay where anyone could post hardware they didn’t need and any other employee could take it from them. All that was needed to complete a transaction was the signature of the manager in the listing department and the signature of the manager in the receiving department. The surplus hardware was then shipped via the company’s internal shipping mechanisms to the loading dock nearest the new “buyer.”

What a brilliant way to reuse equipment within the company! At IBM, we called this spending Blue Money, money that had already been spent and now should be maximized and used again as many times as possible since it wasn’t costing the company anything with outside vendors. Perhaps there is some “Blue Money” in your organization that could be better utilized somewhere else.

At The Mimix Company, we’re working hard to invent the next generation of reading, writing, and research tools for computer workers of every kind. We believe that better tools give better results. We invite you to check out the whitepaper and join our efforts!